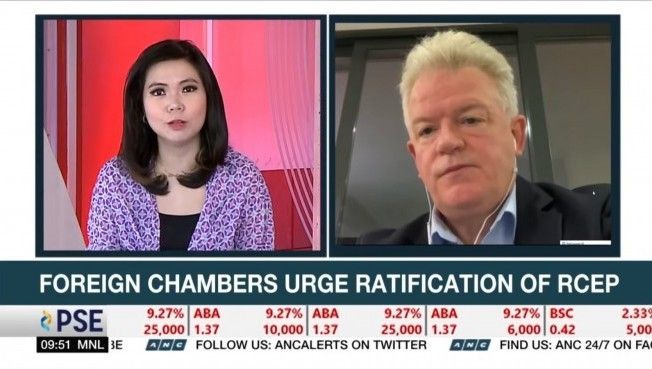 The urgency of the Philippine membership to Regional Comprehensive and Economic Partnership (RCEP) is being pushed by the British Chamber of Commerce Philippines.

“It’s going to be the largest free trade market. It’s 29% of the total global GDP. And this is something we (including all foreign chambers) strongly believe the Philippines needs to be part of,” Nelson said.

Noting as well the incoming DTI Secretary Fred Pascual who is a supporter of the country’s membership in RCEP, the British Chamber expects policy continuity under Marcos Jr.’s admin.

When asked why the British Chamber is calling for the Philippines’ membership in the RCEP when the UK is not a member of the trading bloc, Nelson asked:

“The UK government is looking at trade agreements around the world. It would consider to try and join in some form or another class on the link with RCEP, and obviously, it would like to see the Philippines be part of it.”

Delay in RCEP ratification could mean losing potential export markets, investments, and jobs for Filipinos. In ASEAN, only Philippines, Indonesia, and Myanmar have not ratified RCEP yet; the rest have RCEP agreements in place as early as January 2022.

When asked about the latest British investors’ interests, Nelson recognised the soaring inflation posed to the UK economy. Despite this, the British Chamber remains committed to its objective to support and continue identifying trade and investment opportunities between the two countries.

“We’re going to highlight opportunities [particularly]  in food and beverage. So yes, there are significant challenges in the UK economy, but that does not preclude people looking at opportunities in the Philippines and that’s our role to highlight and continue to do so,” he said.

The British Chamber recently concluded its three-day in-person British Meat Trade Mission bringing eight British meat exporters to explore the available business opportunities and help them establish long-term partnerships with their Philippine counterparts. The event was the first mission to take place in the Philippines after the relaxing of COVID-19-related travel restrictions.